What is your miracle?

“There are only two ways to live your life. One is as though nothing is a miracle. The other is as though everything is.’” Albert Einstein.

If you choose to see everything as a miracle, what is your favorite?
As a Manifestation Coach, I know that most miracles (read more) can be explained away by physics, the universal laws of attraction. Just because something occurs outside our own belief system, doesn’t mean it’s a miracle, just something we don’t yet understand. The lovely part of that means with focus, desire, belief and faith, we can create our own miracles. Yay! And even though I know this to be true, like Einstein, I still prefer to call manifestations miracles. This was just one of mine . . . .
It was a Wednesday fall afternoon in 2001. Due to a recent treatment on an overactive thyroid which had rendered me totally energy-less, I was unable to tend to any of my clients and slept much of the time. Having been a couch potato for at least three months, I wondered if I would ever recover and be able to work again. The balance in my bank account had diminished . . . and diminished. Fretting about bills that had to be paid, I had a “chat” with the Universe. Actually, I told them in no uncertain terms that they had to bring me a money miracle of $4,000 or more by Friday at 5.00. “In the meantime, “I added, “I’m going to lay down (as was my wont) and watch movies. You have to bring it,” I repeated. “Please and Thank you.” With that, I released my request/order to a higher power and went to lose myself in yet another Turner classic.
The next day, Thursday, I felt an uncustomary and energetic urge to wander down the block to collect the mail. There in the metal slot was an envelope addressed to yours truly. Imagine my surprise when I opened it and there, with my name on it, was a cheque for $4,123.00!
The miracle was that it had come from a deceased person who I knew did not have this money in their account when they died. Anxious that the cheque might be an illusion, I rushed to the bank and cashed it before it could evaporate back into the ether. Thank you, Universe. If I’d only asked for $40,000! Ah well. That will just have to be another miracle! 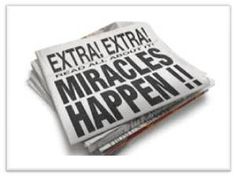